Are You Solving the Right Problem? 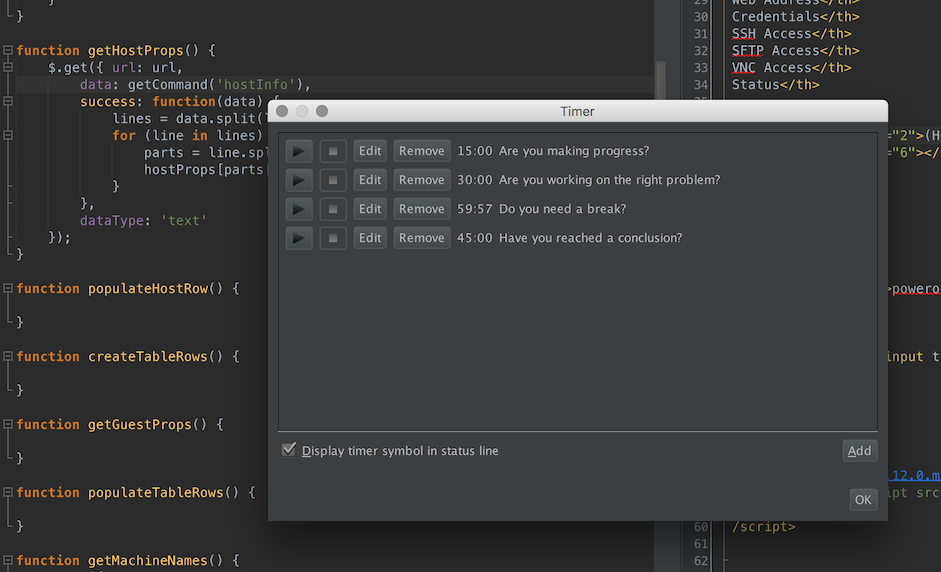 That may seem like a dumb question but consider this recent chain of events:

Can you see the issue here? The actual problem that I wanted to solve was described in the first line, everything after that point was actually irrelevant. At that time the problem with the remote desktop didn’t matter – I could have used either the SSH command line or the VirtualBox GUI on the monitor to start my staging server and test the plug-ins, something that should have taken 10 minutes or less.

And that kind of thing happens to me a lot.

So, I start a task to address a particular problem, and after some arbitrary time I find that I am one of the following states:

Hence, here is my personal task management proposal (which ties into my earlier post about journalling everything I do). I will write in my journal a brief sentence explaining what problem I’m intending to tackle, with maybe a second sentence on the approach I proposing to take. Then I start a timer – somewhere between 15 and 60 minutes depending on the task. My IDE of choice, NetBeans has a timer function (see the screenshot above), or if I’m working on something else I have a timer App that lives on my menu bar, or could just use my watch.

And when that timer interrupts I just answer the question “Are you working on the right problem?” (The one that you wrote down earlier). This may seem like an annoyance but in my life those four outcomes are equally likely, so consider what could happen in each case:

In three out of four cases the timer interrupt and the question are helpful and highly likely to keep me on track; and in the fourth just restart the timer with a longer period.

Will this work for everyone? Obviously not, but I’m going to try to adopt this as a discipline and see how effective it is for me.

I can also see ways to build on this, especially if the problem involves coding. If using git for version control some suggest branching and merging often, even several times a day. That sounds like a perfect fit for this discipline – define the problem, create a git branch, do the task, merge the branch.

My timer has just gone off – I’ve completed the task “write blog post”. Now what is right, next problem that I need to address…

The World of Work