I left the University of Kent on a Friday and started work on the following Monday with Chase Electrics, and was fortunate to spend the next 15 years working in a variety of interesting and enjoyable full time jobs in the IT industry.

With Chase Electrics I was assigned the task of modifying the hardware and software for an interference measuring radio. This device was used by broadcasters, telecoms companies and regulators to measure signal strengths and interference over a range of frequencies. I added a UART to the radio and developed data logging and visualisation software on an early laptop computer. This was time during which analogue cell phone networks were being rolled out across the country and the GPR-40 proved quite successful in this field. Below is a screenshot from one of my application showing the channel occupancy records for a range of frequencies. 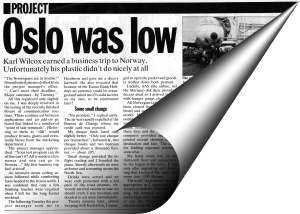 I worked briefly for part of the giant Japanese conglomerate Mitsubishi, developing software for networked “Point of Sale Terminals” (Tills to you and I). This also included my first overseas business trip, to Norway, later immortalised in a Computer Weekly article. Click on the thumbnail to see a full scan of the article.

I was lured back to another of the Chase group of companies to recruit and then manage a team of hardware and software engineers. We developed terminal concentrators, intelligent sub-systems that managed all of the IO between “dumb” terminals and
Unix systems. The first versions plugged directly into the PC “bus”, later versions used Ethernet and TCP/IP. We also exhibited at Compec, one of the early computer shows at Olympia in London, the photograph below taken in 1986 I think. Some memorable company names and logos there…

These became very successful and were the European market leading products in their sector. My team grew to six engineers and our manufacturing grew from a small group of ladies who soldered chips to boards downstairs to entire truck loads of robot assembled products sub-contracted from a factory in Scotland.

Having taken products several times from drawing board to production and sale I wanted a
change of emphasis and moved to British Airways in 1989 to take up a post as Project Manager. I managed a variety of projects mostly involving planning, including the mainframe based flight planning system, crew rostering and briefing.

Whilst here I did have a project managers’ worst moment. Returning from leave, my boss asked to see me as soon as I came in. His words are burned in my memory –

“Karl, the Catering Systems Manager has taken a job with Virgin Atlantic so security have cleared his desk and escorted him out of the building. The 10 year old system that allocates catering trucks to deliver the right food to the right aircraft at the right gate has packed up. No-one knows how it works and we’ve got massive departure delays building up. Sort it out would you?”

However, I’d like to think that my biggest impact on the airline was the conception and high level design of a new crew briefing system for Heathrow Airport. The airline was building a large new Operations Centre on the north side of the airport to bring together activities currently scattered across three sites, all with different systems and business processes. There were several systems in use that provided information to flight crew and cabin crew about the flights they about to operate. I recognised that these would not co-exist happily, both technically and operationally, and that a new combined system would be required.

Wanting to get closer to the actual operation I moved to the Flight Operations department in 1995. I worked as a consultant on all types of IT related projects in the department, including a new document management and authoring system for flight manuals; the analysis of data from aircraft flight recorders and writing the Requirements Specification for a new Flight Planning System.

I also undertook some consultancy for other airlines, mostly in the flight planning and crew briefing areas. On one memorable, if tiring, day I rose at 5am to catch a flight to Zurich, visiting Swissair to see their flight planning system. Returned to Heathrow that afternoon to catch a coach to Stansted where I took the jumpseat in a parcel carrier’s DC10 to Frankfurt. Observed the crew briefing process overnight, finally getting to an airport hotel at 4am.

It was also during this time that I began giving guest lectures on IT subjects at various
universities, including Kent, Nottingham and Southampton. I found I greatly enjoyed doing this and made friends and contacts.

Finding that the consultancy the most interesting part of my job I moved to ICL in 1999, joining the Transportation Systems department as a Technical Design Authority (TDA). More travel ensued, and
my work broadened out into the design of systems for airports and advising the National Hydrographic Office on the use of XML.

I was promoted to the post of Systems Architect (SA) and became involved in the training and development for the TDA and SA roles, working closely with ICL’s Chief Engineer; appropriately filled at that time by a Scotsman, as I could never dissociate his title from Star Trek. 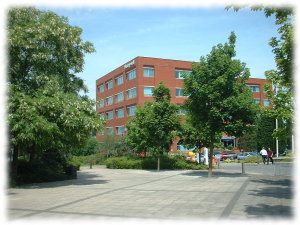 Wanting to branch out from avionics into broader airline systems, Honeywell Aerospace began acquiring companies in that space, beginning with ICL’s aviation interest, including me. I was based in Bracknell, Berkshire while my line manager was in Phoenix, Arizona, which made for inconvenient team meetings.

This gave me a lot of autonomy, which I hope I put to good use. For example I read about
SVG in a magazine and had a bright idea. I asked our database folks for an example flight schedule exported as an XML file. Over a couple of days I wrote an XSLT transform which turned it into a highly interactive SVG bar chart of aircraft movements, similar to that on our many-thousand pound highly specified workstations, but delivered over a web-browser. At the demonstration I pointed out that we could automate the database export and XSLT transform, get the SVG page to auto-refresh every minute and we would have a highly functional, real-time, read-only display anywhere the client required it. This was very quickly turned into a real product and is now in use with several airlines around the world. 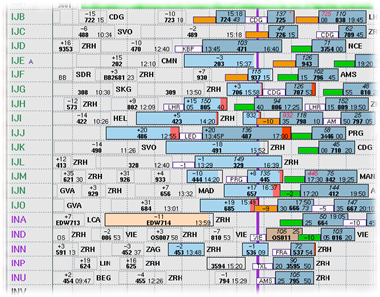