Welcome to the website for Computational Heraldry! This site acts as a central location for all my projects applying information technology to the art of Heraldry.

What is Computational Heraldry? 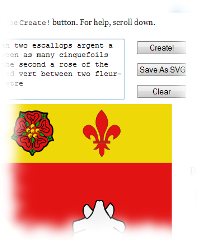 Computational Heraldry encompasses the application of information technology to the art of heraldry, for the purposes of creation, education, interpretation and recording. It includes aspects of computer graphics, textual analysis, data modelling and algorithm design.

We should at this point define more carefully what we mean by Heraldry. For our purposes it is the use of a defined arrangement of a (largely) restricted set of graphical symbols to represent familial or corporate identity. This use and arrangement of symbols is uniquely and completely described by a special purpose language known as ‘blazon’, i.e. the graphical image and its description in the language of blazon are wholly equivalent.

I do not have space here to discuss the long and colourful of heraldry, especially since this is more than adequately covered in many other works (see bibliography). We should however be aware that heraldry originated in the late 11th and 12th centuries and continues in use to the present time; and that the language of blazon seems to have been largely settled by the mid 12th century. It should also be noted, that although heraldry is frequently associated with genealogy, I am not interested in this aspect, other than in its impact on the use and arrangement of symbols. Finally, be aware that Heraldry is not just an English phenomenon but is widespread through much of the “old world” and has spread to some areas of the “new”. There are however differences in practice between countries, although these are largely points of detail than fundamentals. For this reason, everything on this site is based on the practice of English Heraldry, although the techniques shown are applicable (with appropriate minor variations) to the heraldry of any tradition.

This site is split amongst various aspects of computational heraldy, which are echoed in the menu bar at the top of each page. 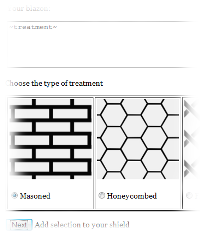 There are many tutorials on blazonry available on-line and in print, however the drawshield engine can also be used to help teach and test understanding of Heraldry. In addition to the Drawshield Build capability mentioned earlier, there is Drawshield Quiz, which challenges the user to match a shield to one of three subtly different blazons.

There is another type of quiz, based on the heraldry recorded in Lincoln Cathedral, which assembles a random set of questions to test users’ knowledge of heraldry.

For reference use, I have updated an earlier project to make available Parker’s Heraldic Dictionary in an easily searchable, on-line form. There are many other heraldry works that have been digitised and made available, I have started an annotated bibliography of some of the most useful such works on British Heraldry. I have also produced a brief guide to using on-line resources to identify any heraldry that you may find. 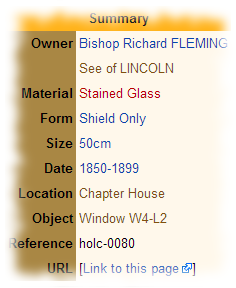 Heraldry is already recorded in armorial rolls, which list coats of arms by alphabetical order of family name. Some reference works (for example “The Encyclopaedia Heraldica”) also include a listing of arms by type, cross referenced with the family name. The advent of digitised documents also now allows for free text searches, for example all family arms that contain three fleurs-de-lys sable (subject to the vagaries of abbreviations and alternate spellings). In contrast, the Heraldry of Lincoln Cathedral project aims to document all aspects of the heraldry within a single location and to investigate the issues that arise from gathering and using this data.

A new project aims to carry out textual analysis on heraldry texts for various purposes, in the first instance to identify blazons within a text. This project is currently at an early stage and is further described here.

Much of the work on computational heraldry is still be properly documented. I have a number of papers in preparation, which are listed in this section. In addition, drawshield is being further developed, the Cathedral heraldry documentation project is ongoing and a new, textual analysis project is currently taking shape.